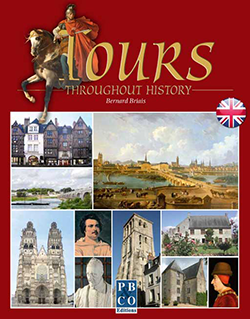 Tours was created ex-nihilo by the Romans to control the region and spread their civilisation within.

With the advent of Christianity, the city became one of the principal religious metropolis' of the Middle Ages, thanks to the tomb of Saint Martin. The city counted several prestigious monasteries, beacons of the faith and cultural poles of highest importance. Their copyists' manuscript workshops spread a new type of writing throughout Europe, "tiny caroline", which was a true revolution for calligraphy.

Tours also became a political capital during the 15th century with the quasi-permanent presence of the Kings of France and their courts. Louis XI, the most present of them, enjoyed calling himself a "citizen" of the city.

Despite the Monarchy leaving the banks of the Loire to settle in the Ile de France, Tours preserved an important administrative role by becoming the head of a generality which was made up of several provinces.

The city was relatively near Paris and became a haven of refuge for central power in times of threat. It was thus that twice, in 1870 and in 1940, Tours welcomed the government fleeing its armed enemies. With its clear and precise text, this book is abundantly illustrated with documents often published for the first time. They bring to mind the great stages of the history of Tours, situated in the heart of the country, the "Garden of France" and its "Chateaux of the Loire". Century after century, this typical French city knew how to grow gracefully, without excess or outrage. It is the very image of a province known for its land of measure and balance, a region where a certain art of living and even good living is cultivated.

« This city is laughing, loving, cool, flowering, and more fragrant than all of the other cities in the world ».