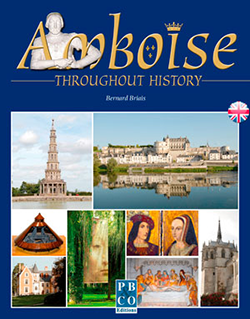 Amboise is one of the few towns where it is possible to see more than 2000 years of history displayed in such a small area altogether. It started a few centuries BC, when some Gallic tribes settled on the plateau of Les Chtelliers. The town later had its glory days in the Renaissance, when the kings of France built there, in the heart of Touraine, a sumptuous chteau. Not far from the royal residence, the genius Leonardo Da Vinci moved into the manor of the Clos-Lucé, at his friend King Francis I's bidding, to live his final years.

The oppidum in Les Chatelliers, the Château of Amboise, the Manor of the Clos-Lucé, the Pagoda of Chanteloup, "Caesar's Granaries", the Chapel Saint-Hubert, the Church Saint-Denis, the Porte de l'Horloge, the Loire riverbanks, the Place Michel Debré, Max Ernst's fountain. All of these are milestones guiding us through the centuries of the town's long history, but also through the history of France.

Indeed this book invites you to travel through time thanks to a clear and accurate text enhanced with a large number of original illustrations. This book would be a perfect pick for any visitor wishing to keep a well-documented memento of their stay in Amboise.