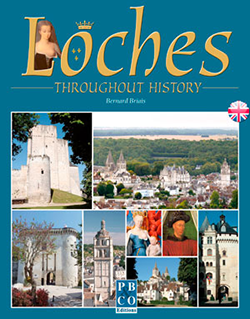 The town of Loches developed just below one of the most formidable medieval fortresses, which first belonged to the powerful Counts of Anjou, and then to the House of Plantagenet, before it became property of the kings of France...

In this town, Charles VII received Joan of Arc during the Hundred Years' War. Later, Loches would also be where he saw his mistress, Agnes Sorel, while his son, who was to become King Louis XI, grew up sheltered by the mighty walls of the citadel.

From these encounters with History, Loches, within its double ramparts, has retained several monuments: the keep, the Royal Lodge, the church Saint-Ours, the townhall, the Tour Saint-Antoine, the "Chancery", the fortified gates Strolling down the old cobbled streets that time has worn smooth, you will also find venerable houses, bearing witness to bygone centuries "Pay attention! Before your eyes is a masterpiece. Loches is a masterpiece of a town; Loches is the French town where French elegance is best apprehended" .Such was the description made by a twentieth-century author.

But in order to fully appreciate the charms of the place, you have to take your time; for Loches is a discreet, or even secret, town, which will disclose itself little by little, street by street, day by day...

This book will help you catch a glimpse of what lies beyond the monuments and the ancient house fronts: the heart and soul of the city.